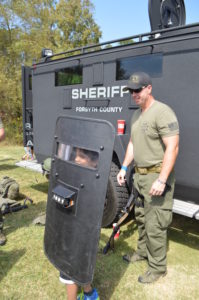 So why is crime in Forsyth County so much lower than these surrounding counties?

Contributing factors include Forsyth County residents’ commitment to hard-work, high education level and focus on family. The most outstanding contributor, though, is the Forsyth County Sheriff’s Office.

The Forsyth County Sheriff’s Office consists of 271 certified officers. That makes it the fourth largest full service sheriff’s office in Georgia. Alongside its prestigious CALEA (Commission on Accreditation for Law Enforcement Agencies) accreditation, the office responded to 181,821 calls with an average response time of less than 14 minutes in all districts.

In addition to daily operations, the Sheriff’s Office also participated in:

Forsyth County takes crime prevention seriously. Its low crime rates are just a few of the various attributes that keep businesses and families relocating to the area.

Low Crime Rates aren’t the only reason Forsyth County is drawing so many people in. It is also one of the most affluent, fastest growing, and healthy counties in the country. To learn more about Forsyth County’s outstanding attributes, contact the Chamber’s Vice President of Economic Development, Robert Long, at rlong@cummingforsythchamber.org.